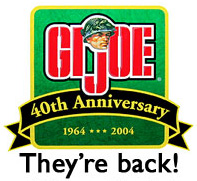 FORT WORTH, TX, August 4, 2005 - The Celebration of GI Joe's 40th Anniversary continues as the official G.I. Joe Collectors' Club takes over the acclaimed series of commemorative reissues of the preeminent action figure GI Joe. Originally created by Hasbro to mark the 40th Anniversary of GI Joe's introduction in 2004, this popular series will go on under the auspices of the G.I. Joe Collectors' Club.

Hasbro had planned to release 30 commemorative sets, with each featuring an authentic recreation of a GI Joe action figure, exactly as he was in 1964, along with a uniform or accessory card, all housed in faithfully-recreated reproductions of the original 1964 GI Joe packaging. This series, though highly-praised by collectors, was cut short when Hasbro decided to "retire" the 12" GI Joe earlier this year to make way for the launch of the new SIGMA SIX line, debuting this fall. Only 22 of the planned 30 sets were released before the series was cancelled.

However, old soldiers never die, and in this case, they aren't going to fade away, either. The requests of the collectors have been heard, and starting NOW, collectors can pre-order the next two GI Joe 40th Anniversary sets directly from the G.I. Joe Collectors' Club! By special arrangement with Hasbro, the G..I. Joe Collectors' Club has arranged for a very limited number of new GI Joe 40th Anniversary sets to be produced.

The first two offerings from the G.I. Joe Collectors' Club will be set #23, the Combat Action Soldier, and set #25, the Dress Pilot. Limited to a production run of 4,000, the next two sets in this exciting series can be pre-ordered now, for delivery sometime in November. The Club intends to release the remaining eight sets over the next 14 months provided that there is enough demand.

First up we have the Combat Action Soldier (set #23) with 4-field equipment accessory card. This set gives you all you need to make a complete soldier dressed for the battlefield! This is one of the sets previously cancelled, but now you can have it for your own collection through this Club Exclusive offer!

The second offering is the Action Pilot with Dress Uniform (set #25). This is one of the most desired sets planned for the 40th line! It WAS cancelled, but now you can have it for your own collection through this Club Exclusive offer!