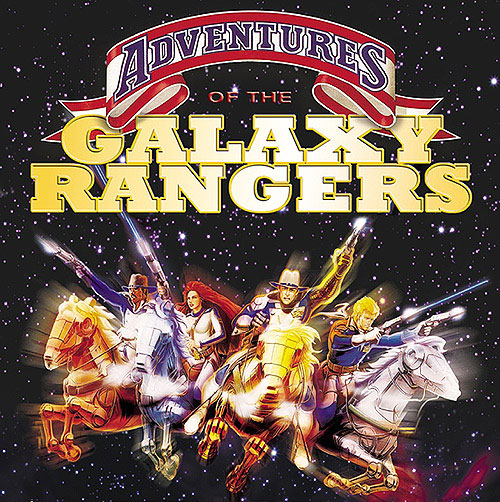 February 16th, 2005 – BETA MOUNTAIN – Hyperchild Workshop and Red Sky Entertainment are happy to announce a multi-year, worldwide licensing agreement for a new line of THE ADVENTURES OF THE GALAXY RANGERS collectible resin statues, which arrive in our galaxy in 2005.

The classic 80s animated series about a unique team of courageous pioneers committed to the highest ideals of justice; dedicated to preserving law and order across the new frontier is finally getting a highly-collectible, limited edition line of polyresin statues this year.

“We are extremely pleased to announce this partnership with Red Sky and, in particular, with Galaxy Rangers creator Robert Mandell, who will be personally involved in this project. Growing up with the excellent writing and animation of the Galaxy Rangers – not to mention the likes of Killbane, the Supertroopers, Lazarus Slade, The Queen of the Crown, Waldo and Zozo, The Scarecrow and of course Geezi the Pedulont, – we wanted to make sure there were products worthy of the show for everyone out there looking for the ultimate versions of their favorite characters. With the successful – and much anticipated – launch of the series on DVD and all of the other new and exciting GR projects coming out this year, there’s never been a better time to be a Galaxy Ranger – or one of their fans.” Says Jeff Kwan, one of Hyperchild’s principal visionaries.

Hyperchild’s immediate plans are to get a special collectors’ piece into the market for Summer 2005. The Galaxy Rangers line will follow the amazing animation artwork and the in-box extra features will be a “must-have” for any Galaxy Ranger fan and animation fans in general.

Debuting in the fall of 1986, THE ADVENTURES OF THE GALAXY RANGERS was an “ahead-of-its-time” animated series featuring great stories and characters that still have a huge fan following 20 years later. The Galaxy Rangers’ renaissance began last year with the release of Koch Visions’ first two DVD volumes of the original 65-epsiode series, which was completely re-mastered for the first time ever. This year the excitement continues, with a new animated series, a graphic novel series, and the further adventures of Zachary Foxx, Niko Dal'Ariel, Walter 'Doc' Hartford and Shane “Goose” Gooseman.

Keep your web browsers pointed to the Hyperchild site for more information: https://www.hyperchildwow.com/galaxyrangers/


ABOUT HYPERCHILD
HyperChild Workshop is a creative development company that designs and produces high-end collectibles. Working with Marvel in Asia and about to announce more licenses, HyperChild is carving a niche in the collectors’ market in Asia and around the world. Visit them at: www.hyperchildwow.com or contact them at firstborn (at) hyperchildwow.com


ABOUT RED SKY ENTERTAINMENT
Red Sky Entertainment is a company engaged in the creation, development, production, and licensing of children’s properties and family entertainment. Recently, Red Sky has focused its attention on launching its slate of properties utilizing publishing with innovative and cooperative marketing and licensing programs.