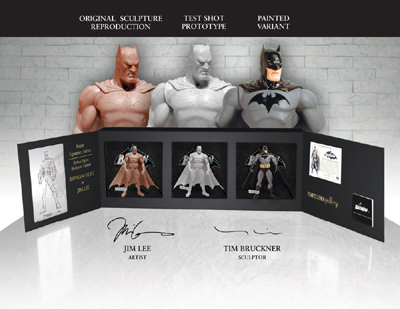 
Fans of Batman and Jim Lee will have a chance to go behind-the-scenes and see an action figure's development in August with the ARTIST SIGNATURE SERIES: ACTION FIGURE EXCLUSIVE EDITION BATMAN: HUSH BY JIM LEE!

This high-end series from the DC Direct Gallery debuts with a set that features a dramatic new paint variant of the BATMAN: HUSH ACTION FIGURE designed by Jim Lee and sculpted by Tim Bruckner, plus a resin replica of the original sculpture created from Lee's designs and an unpainted PVC pre-production "test-shot" used to approve production molds. In addition, all three figures will be numbered.

This deluxe signature series set is packaged in a gold foil-stamped gift-display box with a double-panel lid. A signed replica of Jim Lee's original concept art, suitable for framing, is displayed on one of the inside cover panels. The opposite panel features both a 4-color Certificate of Authenticity autographed by DC Direct premier sculptor Tim Bruckner and a mini-booklet that tells the story of how an action figure is made.

"I think it's one of the coolest things we've ever done," says Georg Brewer, DC's VP Design & Retail Product Development. "For the first time, we're inviting fans to step inside the creative process and see how we work. It represents everyone's creative contributions to the development of an action figure, including Jim Lee, Tim Bruckner, Ed Bolkus and Shawn Knapp who first came up with the idea."

"We have really high hopes for the Artist Signature Series as it is a truly unique concept," says Syndee Barwick, DC's Director Product Management, DC Direct. "Naturally, we're hopeful that building this initial set around Jim Lee's Batman work will be so popular that we'll be able to move into production on more sets in the series!"

"It's an honor to be the first in this prestigious new line," says Jim Lee. "Tim did some of the best work of his career on the BATMAN: HUSH ACTION FIGURE and the fans responded. This set is something that hardcore toy collectors would kill to have in their collections I know I'll be calling DC every day to make sure they send mine to the right address!"

"One of the cool things about this item is that it gives both knowledgeable and novice fans a look at the process, and gives them a sense of why it takes a year from the time someone says 'Let's do this,' to when an action figure arrives in stores," says sculptor Tim Bruckner. "The more a fan knows, the more he or she will appreciate the tremendous amount of time and effort that goes into the DC Direct action figures."

ARTIST SIGNATURE SERIES: ACTION FIGURE EXCLUSIVE EDITION BATMAN: HUSH BY JIM LEE is advance-solicited in the February issue of Previews (Volume XIV #2) and is scheduled to arrive in stores on August 18.