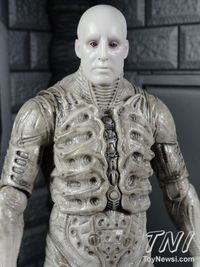 In 1979, director Ridley Scott introduced the world to his sci-fi horror film Alien. In it, the commercial towing spaceship Nostromo investigates a distress beacon sent out by another ship, and in doing so, pick up an unwanted hitchhiker that turns out to be the deadly Xenomorph fans have come to recognize over the years. The movie was followed by several sequels over the years. In 2012, Ridley Scott once again delved into the Alien franchise to bring us Prometheus. Prometheus is said to be a prequel to the first Alien film, and sets up the backstory for the Xenomorphs...or does it?

To celebrate the movie, NECA toys is giving us several action figures based on the characters. The first two are of the Engineer, in two different suits we see him don in the film. I will be taking a look at both, but the first one I'm going to review is on the Engineer in his Pressure Suit. 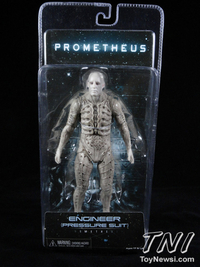 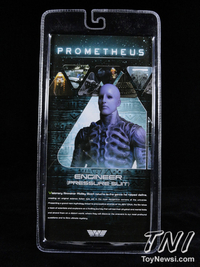 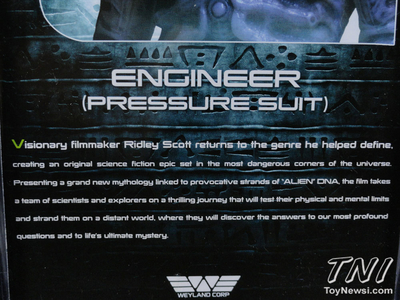 PACKAGING - The packaging is the standard clamshell style packaging we've seen from NECA for many years. It's really no different in style, but of course features inserts that match the movie. We have the movie's name at the top, and the character name at the bottom, with the figure front and center. The back features a quick synopsis of the movie Prometheus, and gives us a cool shot of the figure with some small thumbnails from the movie. Something I found very cool is that they included the logo for Weyland Corp near the bottom of the packaging. I almost missed it at first. Very nice touch. 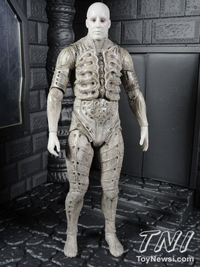 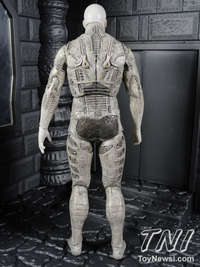 SCULPT - The figure stands at just a tiny bit under 8.5" tall, which seems right considering the Engineer in the film was about 8' tall. The sculpt is pretty uncanny to the movie design. It's actually kinda creepy how accurate this looks. When I was searching Google Image for comparison shots to give an accurate review, I was shocked to see just how accurate the figure looks. It looks like a small version of the guy from the movie. All of this is my way of saying NECA did a very good job. His face looks serene and stoic, and has very rounded features, all of which is perfect. The suit's sculpt is phenomenal, with every bit of intricate bio-mechanic details rendered amazingly from the movie. And of course all of the great detail continues on the back. I'm trying to find any discrepancies from the movie design to this figure, and I can't, really. It looks just like the character from the movie jumped off the screen. It almost looks gross to touch, and of course it looks a tad creepy. 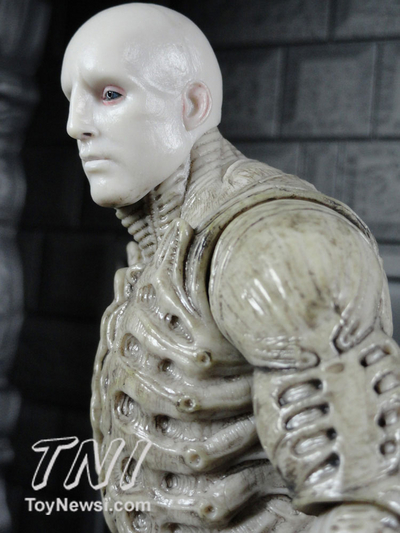 PAINT - This guy is pretty monochrome, all things considered. Of course that's how he should look, but he's not completely just one solid color of white. This skin almost has a pearlescent look to it. The detail on his face is subtle, but appreciated. The slight redness around his eyes are a nice touch, and the eyeballs themselves look wonderful (and creepy). Once again, the paint job makes this guy look gross to touch, as there seems to be a clear gloss coating over the suit to give off the wet appearance it had in the movie. There's wonderfully realistic shading done on the suit too, some great washes that help bring out the sculpt, without just looking dirty. Now I will say that on the whole, the suit's color isn't that different from his skin. I do wish the suit was just a little more silver or metallic, to help differentiate it from his skin. In the movie, it was pretty clear that the suit and his skin were different colors, and the suit looked a bit metallic, which would have helped here. As it is though, the paint job really helps sell the figure. 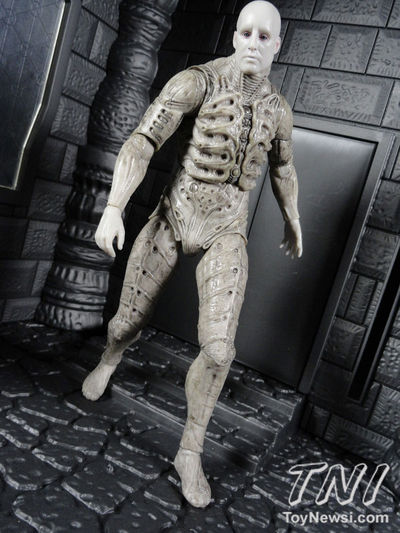 ARTICULATION - He features a ball jointed neck, ball jointed shoulders, swivel-hinged elbows, ball jointed wrists, a floating ab joint, ball jointed hips, thigh swivels, swivel-hinged knees, and ball jointed ankles. Most of his joints move really well. His ab joint has a great range of motion. The shoulders are a bit restricted though, so keep that in mind. His elbows and knees don't have the largest range of motion either, but most single jointed figures in this area don't. His hips are at about a 45 degree angle in his pelvis, so if you want to make him look like he's walking, or put him in a sitting pose, you'll have to angle the ball joint up, and then twist the leg at the thigh rotator back around. It's a little too involved for my liking, and is something that's always annoyed me about the bulk of Hasbro's Marvel Legends figures, for instance. I'm not a fan of the 45 degree hip joint. If it was in at 90 degrees, the posing would be exponentially easier, however if you try you can get some good range out of his joints, and some very natural looking poses. And if you want, you can get him into some crazy fighting stances too. 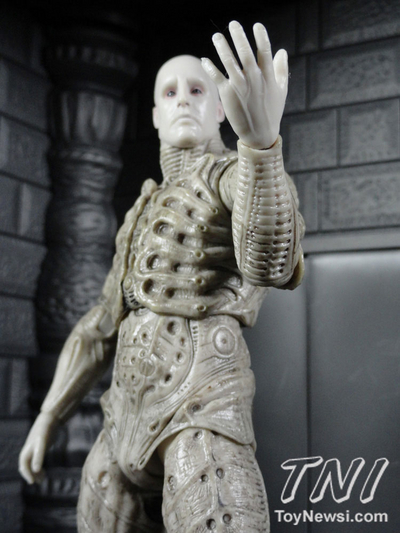 ACCESSORIES - He comes with no accessories, unless you count excessive creepiness as an accessory. I'm honestly not sure what sort of accessory he could have come with anyway, so I don't really see this as a problem. 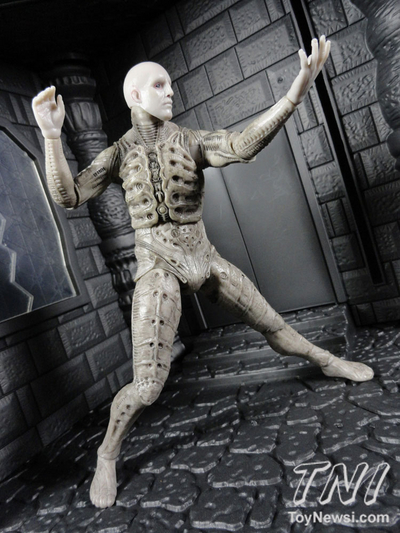 FUN - That's kind of a tough one. As a figure, he's pretty fun. He's visually interesting, and has a pretty good range of movement. Those are the two biggest criteria I judge a figure's fun factor on. I try to keep character bias out of it as much as possible, but I can't imagine anyone who isn't a fan of the movie having too much fun with the figure. That's true of almost anything though. Still, he is fun to mess with, and because of his articulation, you won't be stuck putting him in one boring pose on your shelf. When they start making the human characters, you can have fun making some cool displays of him fighting them.

QUALITY CONTROL - I didn't notice anything wrong with him in this regard. 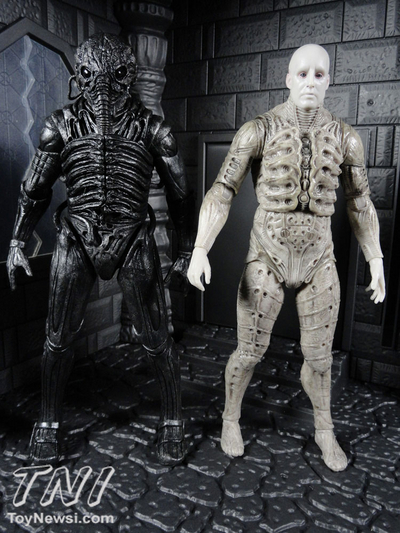 OVERALL - The figure's sculpt is amazing. It's not surprising considering it's NECA, but even so it's awesome how good this figure looks. His paint job adds to the realism and makes him look even creepier and gross to touch, which is always a plus for a figure based on a movie monster. His articulation could have been improved upon, but really it's par for the course for NECA recently. Some might argue that his articulation exceeds a lot of their other figures. Fans of the movie will be very pleased and want to pick these up. Aside from all the complaints, it's a fantastic rendering of the Engineer from the movie. Considering NECA's fanbase, they strive to bring that realism to their figures over anything else, and they certainly succeeded here. 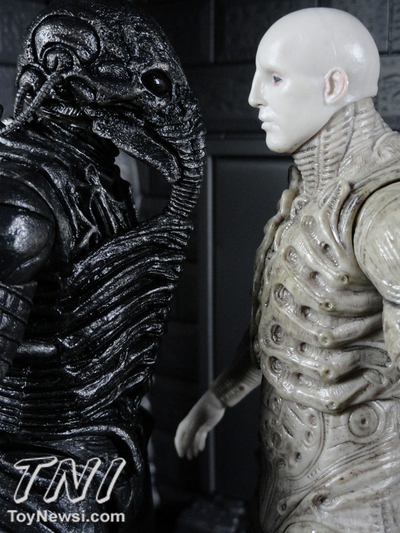 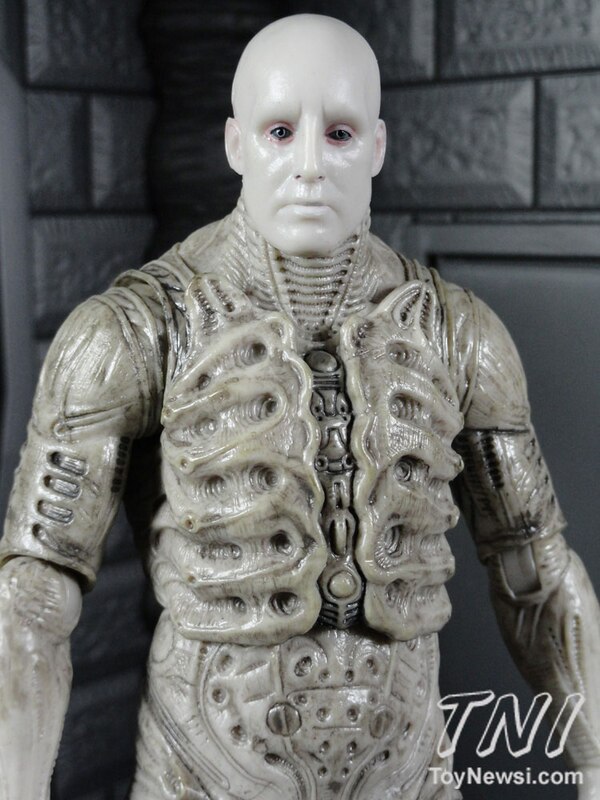 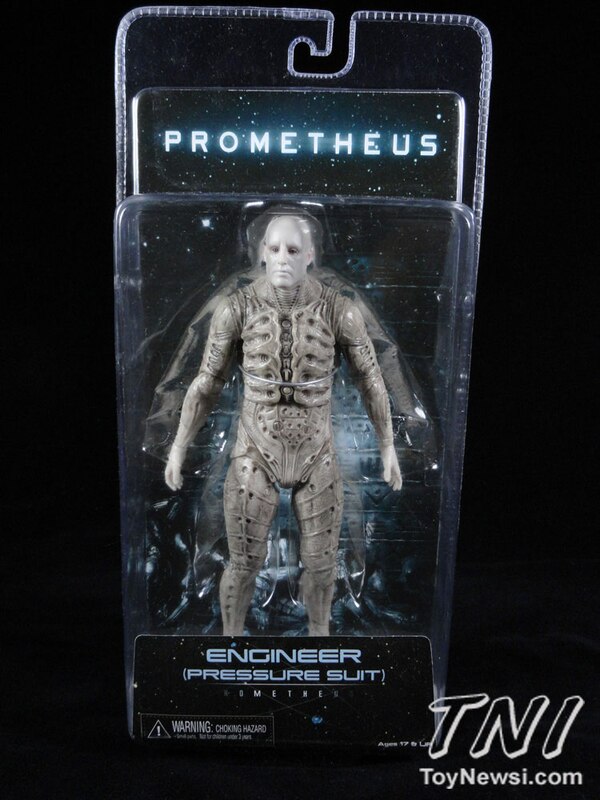 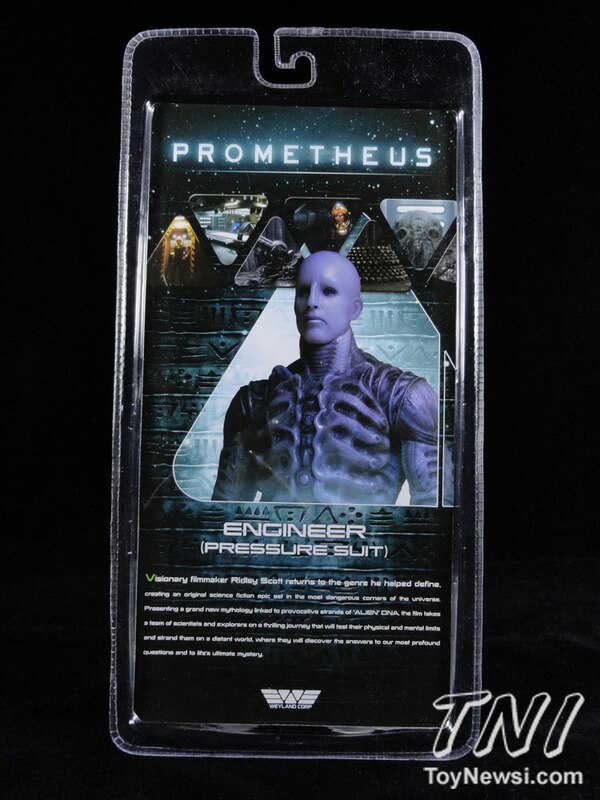 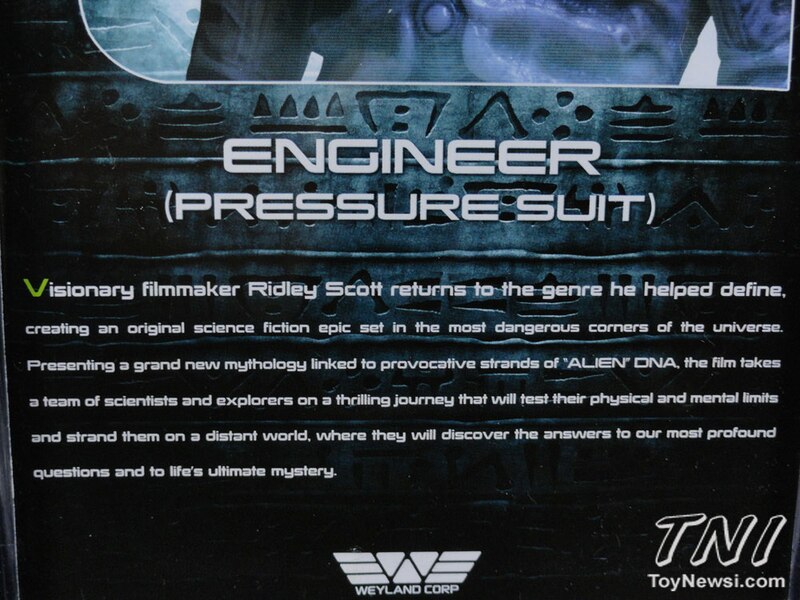 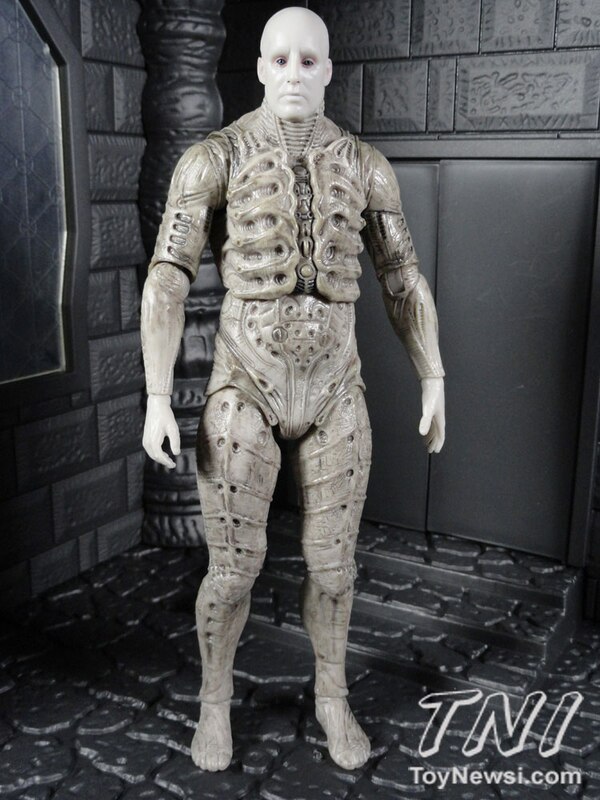 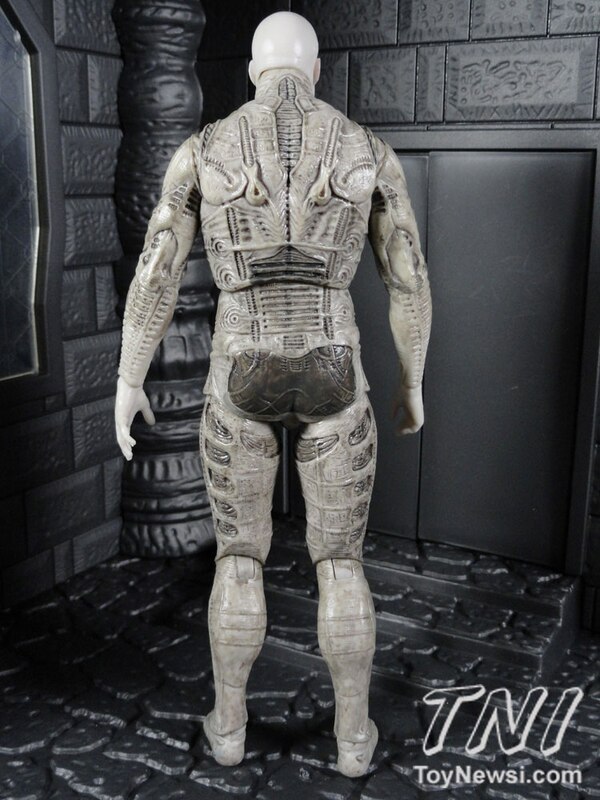 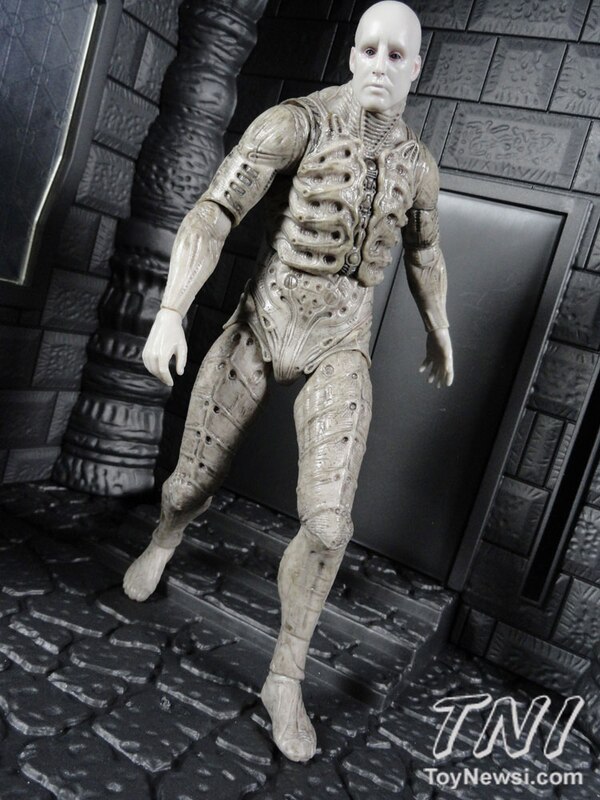 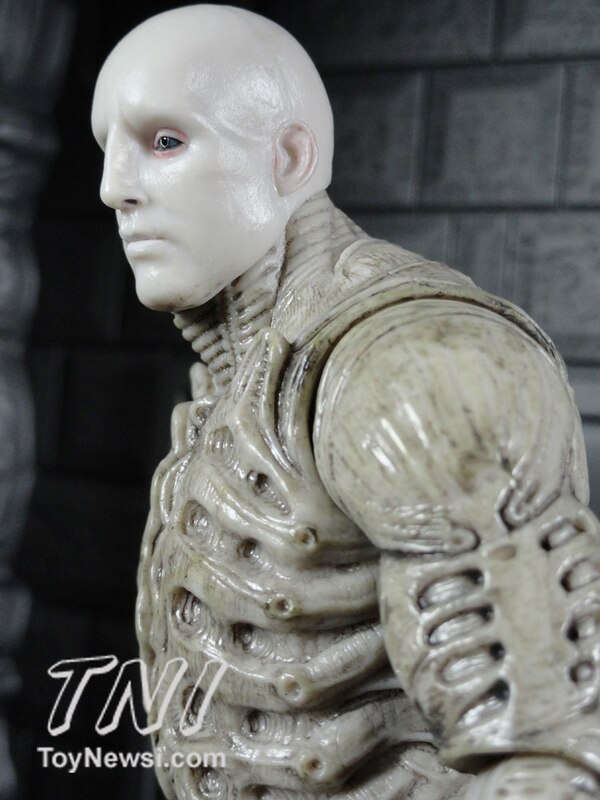 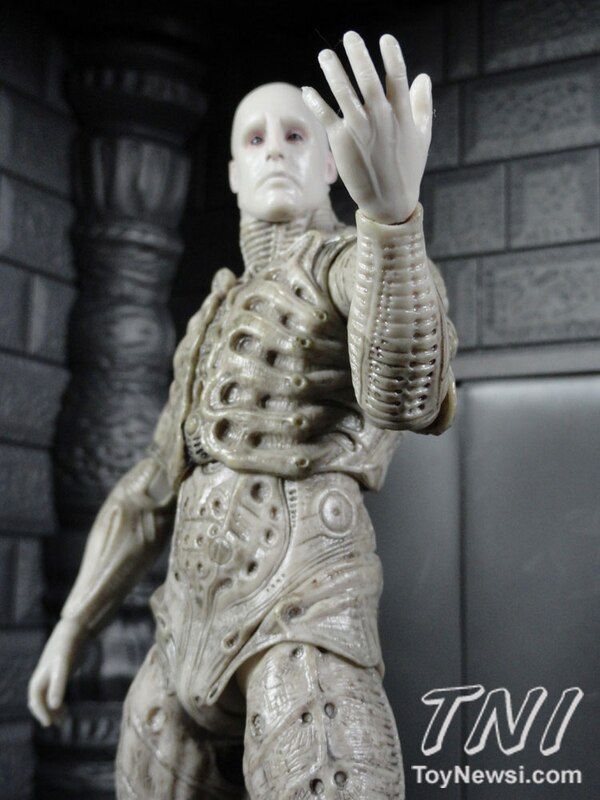 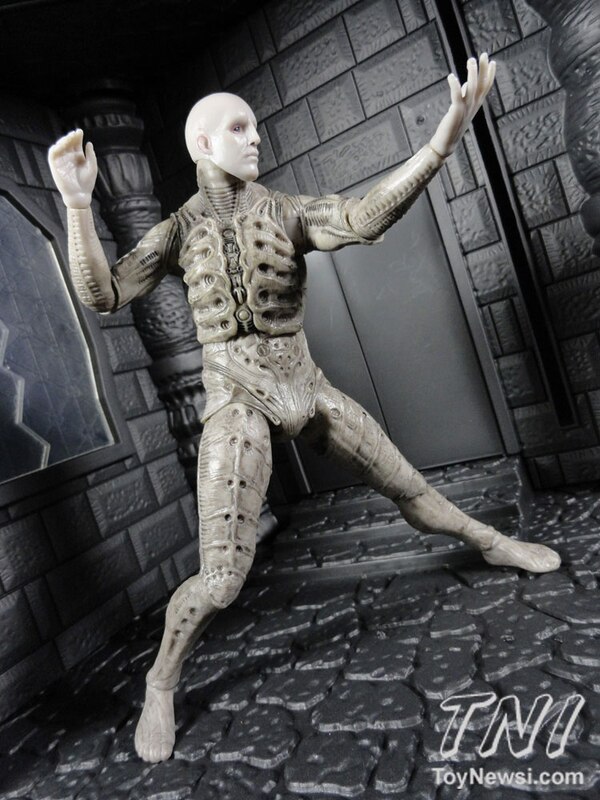 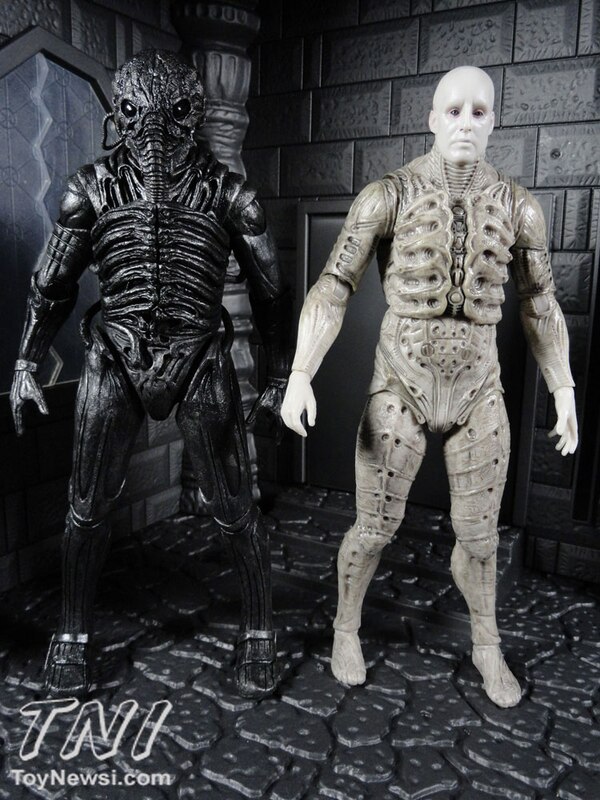 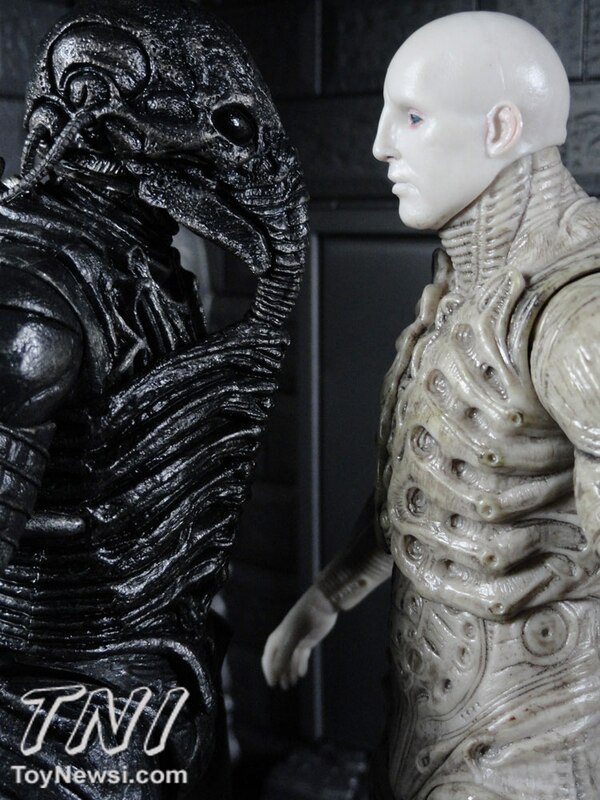