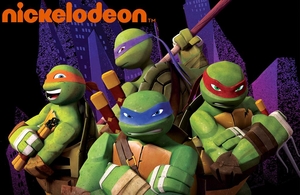 "I am so excited about the opportunity to work with the Nickelodeon team on this new Turtles venture," said Anthony. "The Turtles were such a huge part of my childhood, so to now be partnering with Nickelodeon on Turtles by Melo is honestly something I never could have imagined."

Added Pam Kaufman, Chief Marketing Officer and President Consumer Products, Nickelodeon: "We are so happy for Carmelo Anthony to join the Nickelodeon family for Turtles by Melo. A product line created and curated by a superstar - and super-fan - like Carmelo is testament to the Turtles' ever-growing appeal, and it's a huge part of the drumbeat beginning for new seasons of the TV show and the theatrical sequel from Paramount Pictures next summer."

In addition to Anthony's status as a Turtles super-fan and Creative Director of Turtles by Melo, he will make a special guest appearance in next summer's sequel to Teenage Mutant Ninja Turtles, the follow-up to Paramount Pictures' blockbuster 2014 hit. The NBA Superstar will also be a featured part of the second annual Nickelodeon Kids' Choice Sports, live from LA, Thursday, July 16.