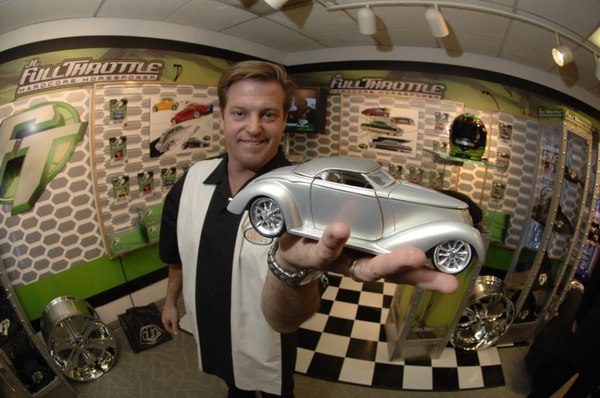 OAK BROOK, IL-(October 26, 2005) – RC2 Corporation (NASDAQ: RCRC) announced today, at a press conference from their New York showroom, an exclusive licensing arrangement with legendary auto designer and fabricator Chip Foose. RC2 will launch JL FULL THROTTLE, an all-new, premium line of customized die-cast vehicles featuring the original custom designs of Chip Foose. JL FULL THROTTLE will deliver all of the “hardcore horsepower” integral to today’s hottest automotive trends. With unique scales and a high level of detail, JL FULL THROTTLE will bring to life the excitement and passion of the custom car culture, an industry in which Foose has been setting trends for over 15 years.

Speaking at the press conference earlier today, RC2 President Peter J. Henseler stated, “We are thrilled to be partnering with such a well-known, well-respected and talented designer as Chip Foose. His insight and cutting-edge style will ensure that JL FULL THROTTLE is on-trend for die-cast enthusiasts, collectors and younger fans alike.”

In keeping with RC2’s history of producing high-quality licensed vehicles covering many different eras and themes, these authentic JL FULL THROTTLE Chip Foose replicas will be highly-detailed and enhanced with top-of-the-line paints and graphics. The line will launch in the spring, with vehicles from Foose’s extensive portfolio, including vehicles from the hit TLC show Overhaulin’.

Chip Foose stated, “I am really excited to be working with RC2 on the JL Full Throttle replications of custom vehicles designed and fabricated by Foose Design. I will be working closely with the talented staff at RC2 to select, design and manufacture the very best vehicles of Foose Design. Not everyone can own a full scale Foose custom, but now collectors and fans can own a detailed, authentic replica! I have seen the early engineering models and the detail and accuracy is amazing. I am looking forward to doing big things, in small scales, with RC2!”

ABOUT CHIP FOOSE & FOOSE DESIGNS
Chip Foose currently serves as the creative head and driving force behind Foose Design. This widely respected automotive and product development company headquartered in Huntington Beach, CA specializes in illustration, graphics, ideation model making, surfacing and the complete construction of automobiles and automobile-related products. Today, Foose Design products and creative services are available to private individuals, television and film companies and automotive manufacturers. Chip’s career includes numerous industry honors including being the youngest member ever inducted into the Hot Rod Hall of Fame (at age 33) in 1997 and the first recipient of the Goodguys Trendsetter Award in 1998. The following year Chip won the prestigious “American’s Most Beautiful Roadster” (AMBR) award with his design for Fred Warner’s “Shock Wave,” followed in 2000 by another win with Chuck Svato’s “0032.” To date, Chip has been involved with six AMBR-winning vehicles, an unprecedented three Ridler Award Winners, (2002, 2003, 2005), The SEMA “Best of Show Award” presented by Ford at SEMA in 2002 and seven Goodguys Street Rod of the Year Awards. He was inducted into the Daryl Starbird Hall of Fame in 2002, Grand National Roadster Hall of Fame in 2003, and the San Francisco Rod and Custom hall of Fame in 2005

Today, Chip Foose and his Foose Design Creative team are starring in the popular TLC series Overhaulin’, where they restore, revamp and remarkably recreate an unsuspecting owner’s vehicle into the car of their dreams in a single week.

ABOUT RC2 CORPORATION
RC2 Corporation (www.rc2corp.com) is a leading designer, producer and marketer of innovative, high-quality toys, collectibles, hobby and infant care products that are targeted to consumers of all ages. RC2’s infant and preschool products are marketed under its Learning Curve® family of brands which includes The First Years®, Eden® and Lamaze brands as well as popular and classic licensed properties such as Thomas & Friends, Bob the Builder, Winnie the Pooh, John Deere and Sesame Street. RC2 markets its collectible and hobby products under a portfolio of brands including Racing Champions®, Ertl®, Ertl Collectibles®, American Muscle™, Johnny Lightning®, AMT®, Polar Lights®, Press Pass®, JoyRide® and JoyRide Studios® . RC2 reaches its target consumers through multiple channels of distribution supporting more than 25,000 retail outlets throughout North America, Europe, Australia, and Asia Pacific.