Valiant
by Jay Cochran
April 12, 2013
Valiant is proud to announce that it has partnered with Quarantine Studio for an exclusive array of high-quality limited edition statues, realizing the greatest heroes of the Valiant Universe in three dimensions for the first time anywhere!

The first Valiant/Quarantine release, scheduled for 2014, will be the X-O Manowar Deluxe Edition Statue, based upon the art of superstar artist Marko Djurdjevic. Sculpted in polyresin and standing 14 inches high on a 9 inch by 10 inch base, the first-ever sculptural representation of Valiant's signature hero will recreate Djurdjevic's iconic cover art to X-O Manowar #12 – a key centerpiece of the "Planet Death" storyline currently being published the X-O Manowar monthly series. The hero then begins a brand new adventure this July in X-O Manowar #15 – the first issue of an all-new story arc by New York Times best-selling author Robert Venditti and fan favorite artist Lee Garbett.

A fifth century Visigoth warrior abducted from his own time and stranded in the modern day, X-O Manowar is engaged in a never-ending crusade against the race of alien conquerors known only as the Vine. With agents implanted over a millennium in every rank and station of human society, the Vine believed their silent conquest of Earth was all but assured – until Aric of Dacia escaped back to Earth bearing the Vine's own ultimate weapon. Now, trapped in a century far removed from his own, the hero called X-O Manowar will finally have his revenge on his alien oppressors. And the weapon he will use to do it will be their own.

"The most amazing thing about our working on this tremendous catalog of titles and characters is that the Valiant brand has, up until now, been untapped for the statue market," said Quarantine Studio CEO Paul Conner and Creative Director William Paquet. "With every other major comic publisher having been licensed repeatedly over the past couple decades, Valiant has been lurking in the shadows, rebuilding its footprint to unleash itself back into the spotlight with supersonic concussion. To say we are thrilled to be a part of this renaissance is a gross understatement.

"We have long been fans of Valiant, but the rebirth of the company is mind-boggling," they added. "Our most difficult task right now is deciding where to focus our creative efforts. The Valiant Universe is vast and inspiring."

"Quarantine have a proven and well-earned reputation for producing some of the most high-quality sculptures in the industry," said Russell A. Brown, Valiant's President of Consumer Products, Promotions, and Ad Sales. "They're an ideal partner for Valiant and this is the first of many of exciting partnerships we plan to reveal in the coming weeks and months."

Founded in the fall of 2008, Quarantine Studio is one of the U.S.'s leading producers of pre-painted statues and faux bronzes, having previously produced works based on a wide array of properties including Robert E. Howard's Conan, Frank Frazetta's Death Dealer, and Topps' Mars Attacks!

Valiant is a leading character-based entertainment company with a library of over 1,500 characters. Since its summer 2012 relaunch, Valiant has returned to the fore as one of the most highly regarded publishers in comics, winning the 2012 Diamond Gem Award for Comic Book Publisher of the Year – Under 4%. Valiant's current titles include X-O Manowar, Harbinger, Bloodshot, Archer & Armstrong, and Shadowman with a new, sixth title – Quantum and Woody – scheduled for a July 2013 debut.
Image 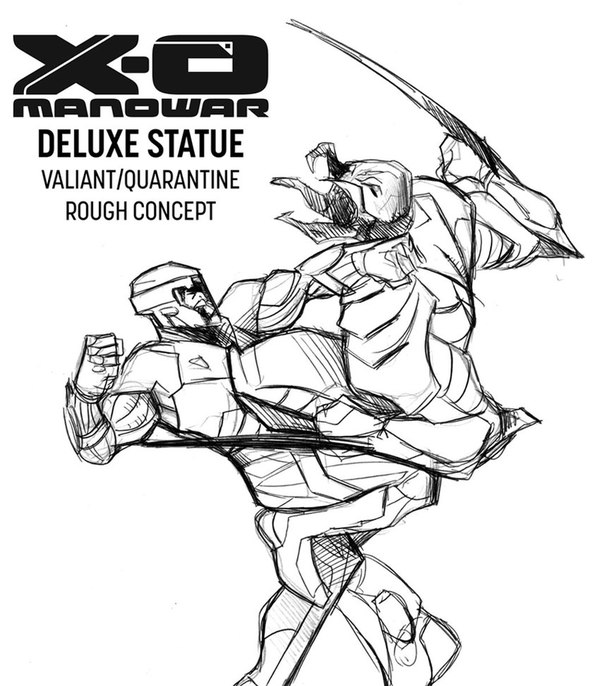