Entertainment
by Outsiders
April 12, 2022
Unmask the truth behind Gotham City’s vigilante detective and his alter ego, reclusive billionaire Bruce Wayne, when “The Batman” arrives for Premium Digital Ownership at home on April 18. The film is directed by Matt Reeves from a screenplay by Reeves and Peter Craig, based on characters created by DC, and stars Robert Pattinson (“Tenet,” “The Lighthouse”). The film will also be available to stream on HBO Max on April 18 and will be available on 4K UHD, Blu-ray, and DVD beginning on May 24.

On April 18, “The Batman” will be available for early Premium Digital Ownership at home for $29.99 and 48-hour rental via PVOD for $24.99 SRP on participating digital platforms where you purchase movies.

On April 18, “The Batman” will be available to stream on HBO Max

“The Batman” can be enjoyed at home with Filmmaker Mode TM. Developed by studios, TV manufacturers, and some of Hollywood’s leading directors, Filmmaker Mode disables all post-processing (e.g. motion smoothing), preserves the correct aspect ratios, colors, and frame rates, and enables your TV to display the film precisely as it was intended by the filmmaker. Filmmaker Mode is available on televisions from select manufacturers.

More than a year of stalking the streets as the Batman (Robert Pattinson), striking fear into the hearts of criminals, has led Bruce Wayne deep into the shadows of Gotham City. With only a few trusted allies—Alfred (Andy Serkis), Lt. James Gordon (Jeffrey Wright)—amongst the city’s corrupt network of officials and high-profile figures, the lone vigilante has established himself as the sole embodiment of vengeance amongst his fellow citizens. When a killer targets Gotham’s elite with a series of sadistic machinations, a trail of cryptic clues sends the World’s Greatest Detective on an investigation into the underworld, where he encounters such characters as Selina Kyle (Zoë Kravitz), Oz, aka The Penguin (Colin Farrell), Carmine Falcone (John Turturro), and Edward Nashton/aka The Riddler (Paul Dano). As the evidence begins to lead closer to home and the scale of the perpetrator’s plans becomes clear, Batman must forge new relationships, unmask the culprit, and bring justice to the abuse of power and corruption that has long plagued Gotham City.

“The Batman” Premium Digital Ownership contains the following special features:
Vengeance In The Making
Vengeance Meets Justice
The Batman: Genesis
Becoming Catwoman
Looking for Vengeance
Anatomy of The Car Chase
Anatomy of The Wingsuit
A Transformation: The Penguin
The Batmobile
Deleted Scenes with Director’s Commentary

Vengeance In The Making
Vengeance Meets Justice
The Batman: Genesis
Becoming Catwoman
Looking for Vengeance
Anatomy of The Car Chase
Anatomy of The Wingsuit
A Transformation: The Penguin
The Batmobile
Unpacking The Icons
Deleted Scenes with Director’s Commentary 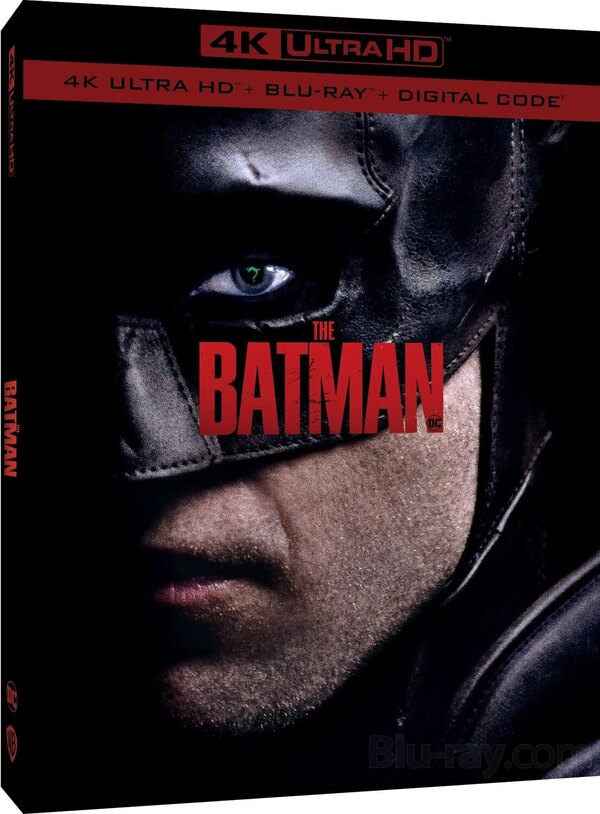 Looking forward to April 18, I saw this in theaters and loved it, cannot wait to see it again! Knowing myself, I will also probably eventually pick up the Bluray, as I want to watch those special features and own the disc for the inevitable destruction of online viewing by some internet outage or something or other. Or maybe tire of HBO Max for a while. When that happens, I will happily put in my physical media copy of The Batman and watch with glee.