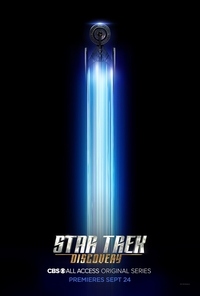 CBS Television Studios and CBS All Access invite Star Trek fans from around the world to join them in a celebration of over 50 years of Star Trek and the upcoming premiere of STAR TREK: DISCOVERY with a line-up of panels, events, activations and merchandise exclusives July 20-23 at Comic-Con International in San Diego, Calif.

Over 50 years ago, the world was first introduced to what would quickly become a cultural phenomenon. It was a television series that inspired developments in science and technology, broke social barriers, and transported viewers around the globe to new adventures and uncharted frontiers. This fall, STAR TREK: DISCOVERY follows the voyages of Starfleet on their missions to discover new worlds and new life forms, while learning that to truly understand all things alien, you must first understand yourself.

CBS is creating a fully immersive STAR TREK: DISCOVERY experience at the Michael J. Wolf Fine Arts Gallery (363 Fifth Avenue, San Diego); Comic-Con badges are not mandatory for entry. The exhibit, running Thursday, July 20 through Sunday, July 23, will feature the debut of - and a photo opportunity with - the U.S.S. Discovery Captain's Chair and will show case additional props, costumes, sketches and more from STAR TREK: DISCOVERY. One thousand fans each day will receive complimentary, limited edition STAR TREK: DISCOVERY posters and the location will also house an official Star Trek Shop with items exclusive to Comic-Con.

From Thursday, July 20 through Sunday, July 23, CBS will offer free "intergalactic" rides throughout the Gaslamp District in pedicabs inspired by the design of the U.S.S. Discovery's Captain's Chair. The pedicabs will feature the series' chair's distinctive stitched black seats as well as video monitors built into its armrests, which in this case will screen trailers for the highly anticipated new show. As an added touch, each vehicle will display an illuminated U.S.S. Discovery delta shield on the back.

On Friday, July 21 and Saturday, July 22, as part of the #TrekDiscovery Challenge throughout San Diego, fans will encounter an array of authentically costumed Trek ambassadors, representing crews from the first five "Star Trek" television series (The Original Series, "The Next Generation," "Deep Space Nine," "Voyager" and "Enterprise"). Fans who post photos of themselves with ambassadors from each of the five series' crews - and in the STAR TREK: DISCOVERY Captain's Chair at the Michael J. Wolf Fine Arts Gallery - and who tag all six photos with the #TrekDiscovery challenge hashtag on Twitter or Instagram, will be eligible to win a Roku streaming stick and a subscription to CBS All Access. Prizes will be awarded on a first-come, first-served basis. Fans can find clues regarding the location of the #TrekDiscovery crews by following @StarTrek on Twitter and Instagram.