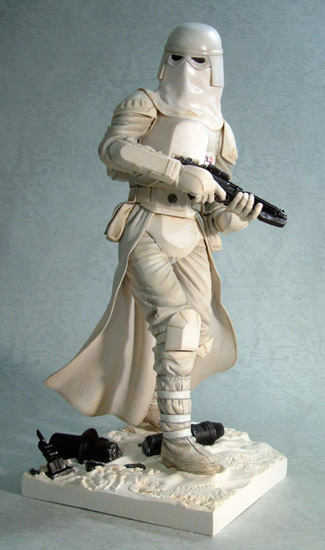 Kotobukiya's red hot Star Wars line, which recently recruited Sith's Shocktrooper and Anakin to its ranks, takes us back to the cooler climes of The Empire Strikes Back with the all new Imperial Snowtrooper. Scaled to match their already extensive line of trooper vinyl figures, Snowtrooper finally brings the fifth chapter's super trooper into the Koto fold.

Storming through the icy corridors of Echo Base like a heavily-armed blizzard, Imperial snowtroopers stopped at nothing in their effort to conquer the Rebels at Hoth. A specially-trained division of stormtrooper infantry, the snowtroopers wear customized armor well suited to the climate extremes of ice planets such as Hoth. In addition to the hard white armor, their suit incorporates fabric overgarments that help contain heat, and terrain-gripping boots to combat slippery conditions. The Hoth snowtroopers brandished standard blaster rifles, and specialized teams used heavy repeating blasters mounted on tripods.

Fans will note that the snowtroopers of Empire debuted a costume motif that was re-utilized for some of the clone army infantrymen of the prequels. The insulating belt cape, which effectively evokes the image of long coat gunmen from the Old West, can be seen again on the ARC Troopers of the Clone Wars animated series and on several clone troopers in Episode III. Fans can only hope that Koto will eventually add these to their growing arsenal of Imperial guardsmen as well.