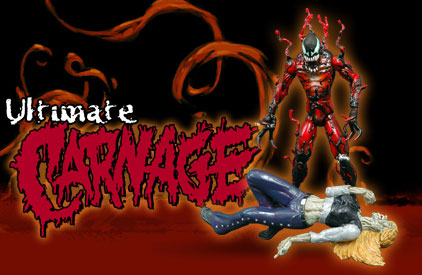 The newest figure, for release in late summer 2005, in the popular Marvel Select line from Diamond Select Toys will be Ultimate Carnage. This figure featuring 14 points of articulation comes with an in scale non-articulated Gwen Stacie.

Created by Dr Curt Connor and Dr Ben Reilly, Carnage is a genetic experiment gone horribly wrong. Thinking he was helping with potentially life-saving research, Peter Parker allowed Dr Connor to use a sample of his DNA. Unknown to him, Dr Connor spliced that DNA with a sample of his own. Carnage was incubated in secret, but escaped from the lab. Able to drain the life force of his victims and absorb their DNA, Carnage’s strength grew with each kill. He was ultimately destroyed when Spider-Man threw him into an industrial furnace, but not before the untimely death of Gwen Stacey. Seemingly gone forever, the only chance of Carnage’s return lies with Dr Ben Reilly and his stolen sample of Peter Parker’s DNA.