Round 2
by Jay Cochran
March 21, 2012
Round 2, LLC, is thrilled to introduce Legends of the Quarter MileTM, a new line of drag racing memorabilia including 1:25 scale plastic model kits, 1:64 scale slot cars and highly detailed die cast 1:18 scale replica funny cars. Round 2 is going back to the heart of the sport of drag racing with these desirable collectibles.

Legends of the Quarter MileTM will honor the funny car racers of the late 1960s through the 1970s, when the sport of drag racing was starting to gain real momentum. Fans flocked to the tracks to see the flashy and unpredictable over-the-top racers, with their flip-up bodies on a tube chassis, filled with the growing technology of the era. These cars set the stage for drag racing as we know it today.

Legendary names in drag racing like what they’ve seen of the new line, and can’t wait to get their hands on these new products. “Cars like this are what drag racing stands for,” said “Big” Jim Dunn, NHRA Hall of Fame member and former funny car driver. “These are truly legends of the sport, and I’m honored to be a part of this history.

The Legends of the Quarter Mile model kit series will feature MPC, Polar Lights and AMT kits 1:25 scale. Legends model kits will kick off with Arnie Beswick's 1969 "The Super Judge" GTO® Funny Car in September, followed in October by another famous flopper to be announced soon. These detailed kits are skill level 2 with paint and cement required. This will be the first time in decades that many of these kits have been reissued! 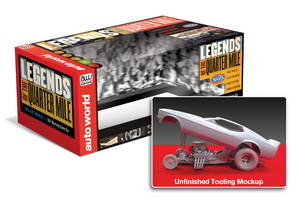 Auto World is creating 1:64 scale slot cars in the style of the classic drag racers as well. The Legends line of slot cars will feature funny car bodies on Auto World’s 4Gear chassis, which has an extended wheelbase and large dragster-inspired wheels and tires. Best of all, two neodymium traction magnets make them the perfect “engines” for these classic funny cars! Also being released is a slot car drag strip track set. It includes the vintage race cars along with 13 feet of track, two variable speed controllers and an LED Christmas tree with in-track sensors and win lights, letting you bring the thrill of drag racing to your own living room!

Auto World is investing in all-new tooling for the Legends die cast line, which will debut with four cars in 2012, and is projecting 6 to 10 cars next year, all as limited editions. The Legends line represents the first time that vintage funny cars have been replicated so authentically in the 1:18 scale.

Shirley “Cha Cha” Muldowney, NHRA Hall of Fame member and renowned funny car and top fuel dragster driver, is excited to be included in the 2013 lineup. “These cars look beautiful. I can’t wait to see my old Mustang in this large scale replica.” Muldowney, also known as the “First Lady of Drag Racing,” is a legend in the sport in her own right, as she was the first woman to receive a license from the NHRA® to drive a top fuel dragster.

The 1:18 scale is an ideal size for Auto World to create such a detailed model, with room to include all the features that bring a funny car to life; these die cast cars will have over 100 parts. Features include soft rubber tires, authentic replica plastic funny car bodies styled just like the real thing with historically accurate graphics, detailed wheels, and manufacturer-specific engines that are fully wired and plumbed.
Auto World is excited to be the first to offer such detail in a funny car replica! “Everything about these cars looks fantastic,” said Tom Lowe, President of Round 2. “We’re the first one to do it in this level of detail. This era of drag racing was the start of all the excitement and noise, and we’re proud to be able to be a part of it in our own way.”
Look for these exciting race cars at your local hobby store in the third and fourth quarter of 2012! See more at www.autoworldhobby.com/legends!
Image 1 of 2 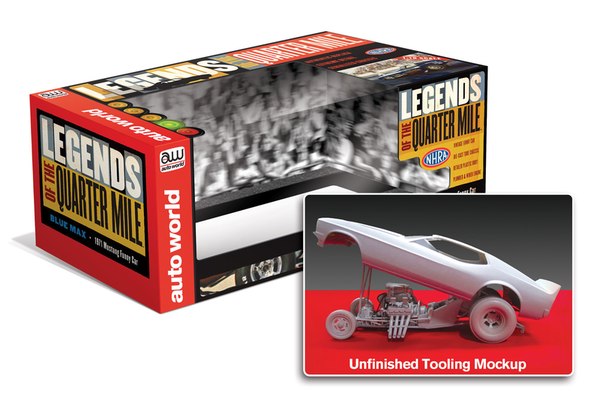 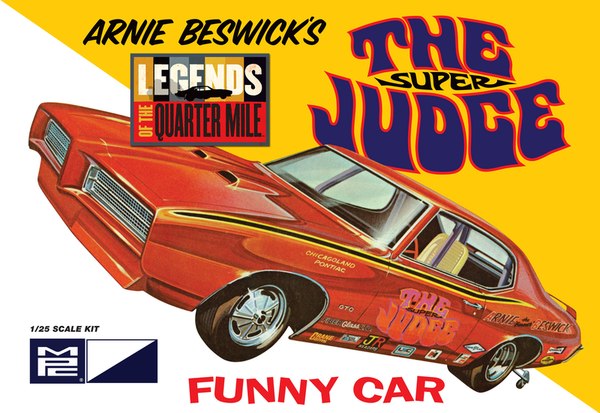