AMC released today the official key art for "Fear the Walking Dead" Season 3, which returns on Sunday, June 4 at 9:00 p.m. ET/PT, with two back-to-back episodes. The art which features Nick Clark (Frank Dillane), and tagline- "Fear What You Become," work together to represent the idea that the person you become in the new world is more brutal, savage and heartless; and capable of things that were unimaginable before the dead began to walk. 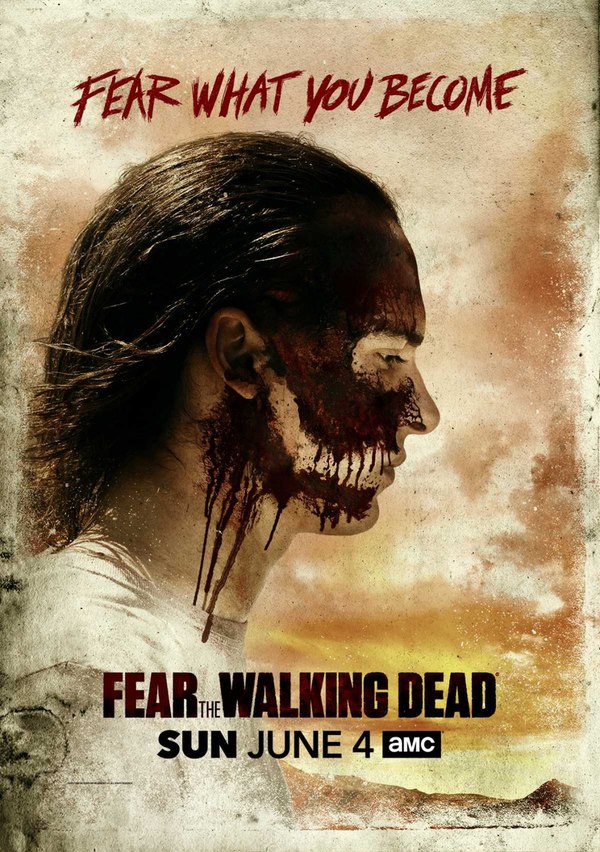 As "Fear the Walking Dead" returns for season three, our families will be brought together in the vibrant and violent region formerly known as the U.S.-Mexico border. International lines done away with following the world's end, our characters must attempt to rebuild not only society, but family as well. Madison has reconnected with Travis, her apocalyptic partner, but Alicia has been fractured by her murder of Andres. Madison's son is only a few miles from his mother, but Nick's first action as a leader saw him and Luciana ambushed by an American militia group - the couple escaped death, Luciana was shot, and Nick no longer feels immortal. Recovering both emotionally and physically, Strand has his sights set on harnessing the new world's currency, and Ofelia's captivity will test her ability to survive and see if she can muster the savagery of her father.

The series is executive produced by showrunner Dave Erickson, Robert Kirkman, Gale Anne Hurd, Greg Nicotero and David Alpert and stars Kim Dickens as Madison, Cliff Curtis as Travis, Frank Dillane as Nick, Alycia Debnam-Carey as Alicia, Mercedes Mason as Ofelia, Colman Domingo as Strand and Danay Garcia as Luciana. Joining the cast as series regulars for season three are Dayton Callie ("Sons of Anarchy," "Deadwood"), Daniel Sharman ("The Originals," "Teen Wolf") and Sam Underwood ("The Following"), who will play the Otto family, founders of a survivalist organization who prepared for the fall of democracy, but didn't anticipate the rise of the dead, as well as Lisandra Tena ("Chicago P.D.") as Lola Guerrero.