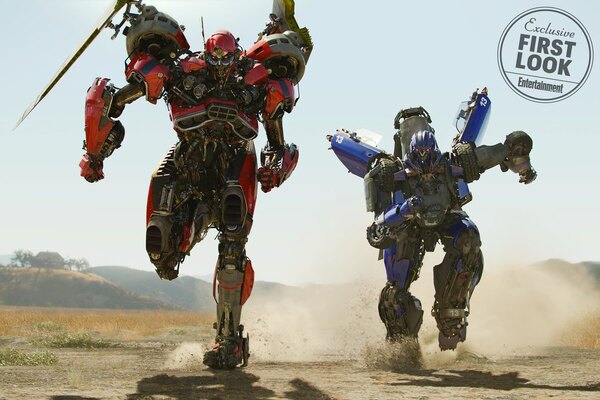 Entertainment Weekly has revealed a first look image of two Decepticons, Shatter and Dropkick from the new Transformers movie featuring Bumblebee. The movie comes out on December 21st and takes place in 1987 with Bumblebee being wounded and taking shelter with a teenager mechanic (Hailee Steinfeld) while trying to avoid two Decepticon trackers.

One of the Decepticons is Shatter, who takes the form of a cherry-red Plymouth Satellite. She will be voiced by Angela Bassett. Dropkick, whose vehicle form is a blue AMC Javelin, will be voiced by Justin Theroux.

In this new Transformers movie, Bumblebee will take on his original 1980s cartoon look as being a Volkswagen Beetle form instead of a Camaro. But the film is breaking tradition by giving the Decepticons wheels instead of wings.

There is one flying villain, whose identity and voice actor are still under wraps, but otherwise, these bad guys will be prowling the roads rather than the skies while pursuing their prey.

“When the cast is too big, and you have a finite amount of time, there’s only so much you can do to create an investment in them,” Knight says. “This is a more personal, intimate, and character-driven story, so it felt right to keep the villain plot relatively simple and contained. If you keep things lean, you can add a lot of other stuff on top of it that makes it more enjoyable.”