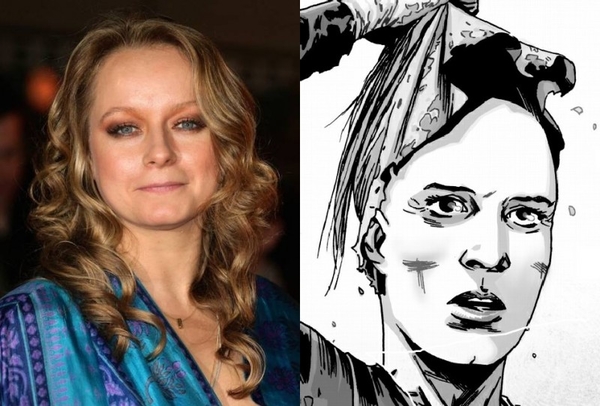 Showrunner Angela Kang announced during the San Diego Comic-Con panel for The Walking Dead on Friday that Samantha Morton is joining the series‘ forthcoming ninth season as comic-conceived antagonist Alpha.

This news came right after Andrew Lincoln confirmed the news that he is leaving The Walking Dead series.

“This will be my last season, playing the part of Rick Grimes,” the actor announced at the show’s panel on Friday. “I love this show. It means everything to me. I love the people who make this show. I promise not to cry — I’ve done enough crying on screen.

“I’m particularly fond of the people who watch this show, you people,” Lincoln continued, addressing the fans in the audience. “This has been the most extraordinary, amazing and beautiful experience of my career… So I just want to thank you.”

Other highlights from the panel include Kang announcing that several other comic book characters will be joining the show, including Earl (played by The X-Files‘ John Finn), Tammy (Grace Under Fire‘s Brett Butler), Luke (The Goldbergs‘ Dan Fogler), and saviors Jed (Entourage‘s Rhys Coiro) and Justin (The 100‘s Zach McGowan).

As for Negan, Kang teased “We’re getting to see some sides of Negan that we’ve never seen before.”

Don't really care about what actor/actress plays who n shows.

Not a huge Walking Dead fan