CBS All Access today revealed the official trailer and key art for the highly anticipated second season of STAR TREK: DISCOVERY and announced the second season will be extended to 14 episodes, from the previously announced 13.

After answering a distress signal from the U.S.S. Enterprise, season two of STAR TREK: DISCOVERY finds the crew of the U.S.S. Discovery joining forces with Captain Christopher Pike on a new mission to investigate seven mysterious red signals and the appearance of an unknown being called the Red Angel. While the crew must work together to unravel their meaning and origin, Michael Burnham is forced to face her past with the return of her estranged brother, Spock.

Season two of STAR TREK: DISCOVERY premieres Thursday, Jan. 17, 2019 at 8:30 PM, ET/5:30 PM, PT exclusively on CBS All Access in the United States and will also be distributed concurrently by CBS Studios International on Netflix in 188 countries and in Canada on Bell Media's Space channel and OTT service CraveTV. The series is produced by CBS Television Studios, Secret Hideout and Roddenberry Entertainment. 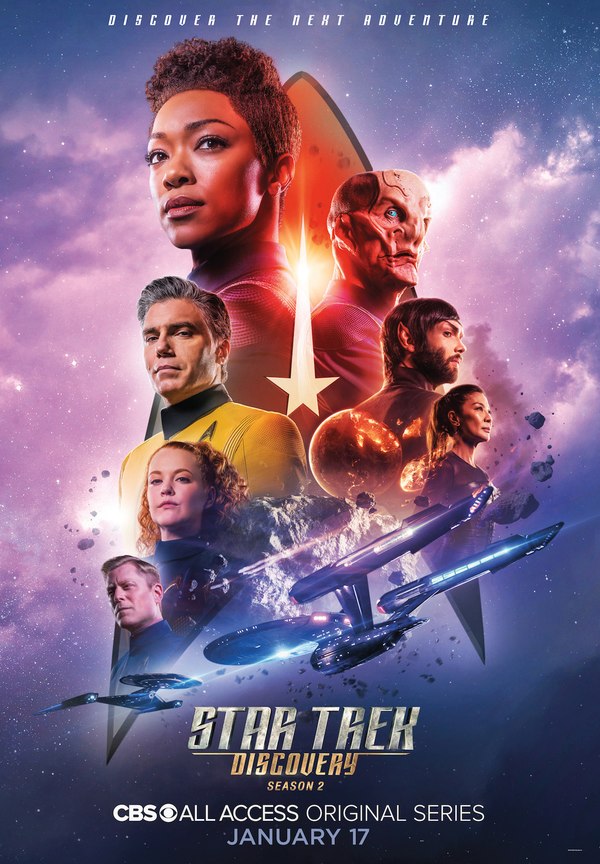 I enjoyed the first season of DSC, for the most part... Though I did have several issues with it, as I discussed in each of my episode reviews, at the time. Im sad to say, as time has gone on, and Ive sat through the first three of their Short Treks shorts, my enthusiasm for the series has been waning a bit. I was markedly excited again when we learned that captain Pike and Number One would appear. Spocks being involved was a mite iffy, to me. And Im still not entirely sold on the actor. The visuals, via this trailer, look good. I mean, even better than season ones. And, its a little more colorful and vibrant which is probably symbolic of the lighter tone season two is supposed to have. Im sure, once it begins again, Ill fall right back in line with the things I dug about it. But, Ill still also be wearing my critical hat, and take to task anything that doesnt sit well with me.

This show is crap. I'll stick to watching the original series, some of TNG, DS9, even ENT. But this and the reboot Star Trek movies, that have so gone astray from what came before, nope. This ain't my Star Trek anymore.

Do you watch The Orville? In many ways, it's the real successor to Gene Roddenberry's Star Trek.

This show is crap. I'll stick to watching the original series, some of TNG, DS9, even ENT. But this and the reboot Star Trek movies, that have so gone astray from what came before, nope. This ain't my Star Trek anymore.

Two things.One: That guy who is playing Spock doesn't seem very good. I didn't think Zachary Quinto was very good (Vulcan doesn't equal wooden), but he was much better.

Two: Section 31 is an autonomous clandestine "security" organization that does not officially exist. It's supposed to be a secret. Very few people are supposed to know about it. Why the hell do they seem so out in the open on STD? Why are they talking about it so matter of factly? Why issue badges that their operatives can show off to people?

With the trailer they showed at San Diego Comic Con, I was actually looking forward to this new season. With each new trailer that goes up on the web, it lessens quite a bit, as I see more of the same, just maybe a little less grimdark.

One of the first Star Trek series since Next Gen that I actually really really love. Im no trekkie but I do have a deep seated love for the franchise. This one is just really great. Its got such high production values, every episode feels like a movie. And the stories are really great too. I look forward to when it drops in January!